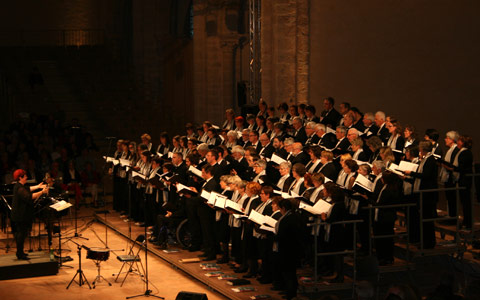 Created in 1987, the Choir of University of Maine (Le Mans, France), conducted by Evelyne Béché since 1993, has about one hundred singers (mainly students, university’s staff, and former students). It performs with piano accompaniment (Dimitri Negrimovski) or with orchestra (Paris’ brass band among others). It has a repertoire spanning music of six centuries: classical music, negro-spirituals (arranged by Rhoda Scott, Godmother of the Choir), jazz, music of the world, movie music, and songs composed by D. Negrimovski. It has performed abroad (Canada, New-York in Carnegie Hall for Misatango by Palmeri in an international choir), in Paris, among others, and it appears each year at the prestigious abbey-church “Epau” performing choral favorites including Messa di Gloria (Puccini), Requiem and Armed Man Mass (Jenkins), Ein deutsches Requiem (Brahms), Gloria (Rutter), Misatango (Palmeri) and soon Requiem (Mozart). Each year, the Choir offers various workshops and lessons for any amateur singer (women choir, male choir, mixed choir, singing music theory, choral conducting), all conducted by Evelyne Béché.
Evelyne Béché, graduated in music education, sight-reading, chamber music, analysis, singing (with honors), and saxophone (gold medal) at the National Music School of Le Mans (France), has conducted several choirs during her career, including choir Emichante for the last ten years, and Choir of University of Maine since 1993. She is professor of vocal technique and saxophone. She created and managed for fifteen years a Music School. During two years, she was appointed by the Territorial School of Music in New Caledonia where she conducted the St. Cecilia Mass by Gounod, performed with musicians and soloists of the Sidney Opera (Australia). 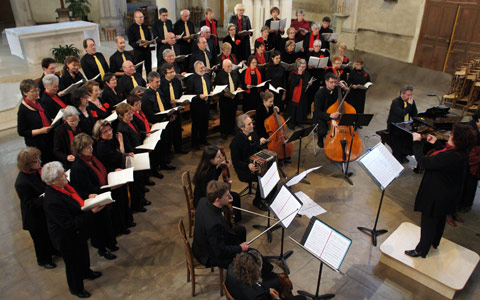 Created in 1989 in the framework of the Intercommunal Music School (Bessé sur Braye – Saint-Calais – Vibraye, Sarthe, France), the choir “Emichante” has forty-four singers; it has been conducted by Evelyne Béché since September 2005 and it is accompanied at the piano by Catherine Kwon.
The choir went on tour in Germany and in Belgium. From 2011, it has performed several times the Misatango by Martín Palmeri accompanied by the composer on piano and by Wolfgang Weniger on the bandoneon. In 2013 it performs the Requiem by Gabriel Fauré, in 2014 the Missa Katharina by Jacob de Haan (choir and wind ensemble). In 2015 the choir “Emichante” and the Choir of the University of Maine had the pleasure to sing together and to perform Misatango by Martín Palmeri at Carnegie Hall (New-York) in an international choir conducted by the Argentinian conductor Pablo di Mario, with the composer at the piano.
The repertoire of the choir ranges from polyphonic music of the 16th century (Monteverdi) to contemporary song.
Since September 2016, the rehearsals are conducted by Ai Adachi at Saint-Calais (Centre Artistique Intercommunal “Jean Françaix”). 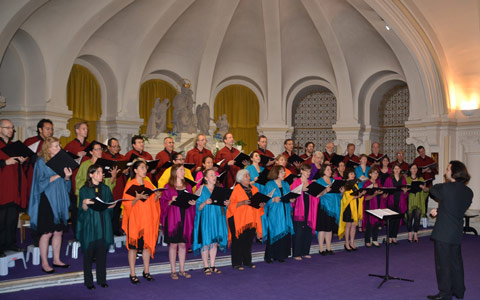 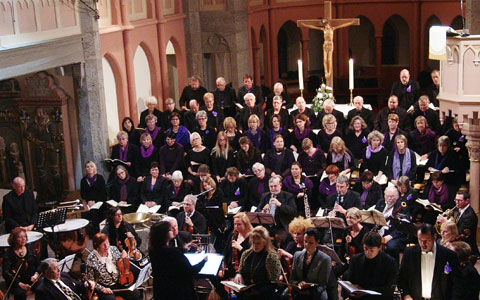 choir „Collegium vocale Kirchberg“ comes from the rural district of Gießen which is situated approximately 70 kilometers north from Frankfurt/Main in Hessen, Germany. The actual number of 80 choirmembers live in 17 different communities in the deanery Kirchberg and it’s neigbourhood. Since 2003 the ensemble that was founded in 1994 is conducted by Deanery Master of Music Daniela Werner. The Repertoire of music sung in the annual concerts reaches from Oratorios, Masses and Requiem masses from baroque, classical, romantic and contemporary composers to theme orientated programs with songs a capella or accompanied by the piano from all centuries. In 2011 the choir visited the Lake Garda and in 2015 the singers went to Southern England with performances at the Dome of Milan, Garda church, the Arena di Verona as well as Bath abbey, Wimborne Minster and the Minack Theatre. After performing the Misatango successfully in concerts in 2012, the Choir is looking forward to two highlights with tango music in 2017 – the active participation in the Misatango Festival in Vienna as well as the invitation to be part of the world premiere of Martín Palmeris new piece Tango credo at David Geffen Hall at Lincoln Center New York in April.
The Conductor, Deanery Master of Music Daniela Werner, learned to play the organ, the accordion, the piano and the flute traverse as a child and adolescent. After graduation in school she studied „Master of Music for instrumental and singing paedagogy“ as well as „Special concert studies“ for the accordion in Wiesbaden and Wuppertal with a very successful graduation in 1996. After teaching pupils, playing in different ensembles and conducting various choirs and orchestras as a freelancer for a while she studied „Master of Music in church“ at the „University of music and performing arts“ in Frankfurt/Main from 2001-2006. Still studying she began to take over some scopes of duties at her actual job, where she now selectively works with children-, youth-, church- and projectchoirs as well as the deanery choir „Collegium vocale Kirchberg“ and plays her instruments and sings during services, in solo performances as well as in chamber music formations and bands. She loves the great variety of music and therefore her range reaches from classical pieces of all centuries to the field of big productions of Musicals with her youth choir, popular music and latin. Additionally to her job she conducts the choir „Voice Factory“. 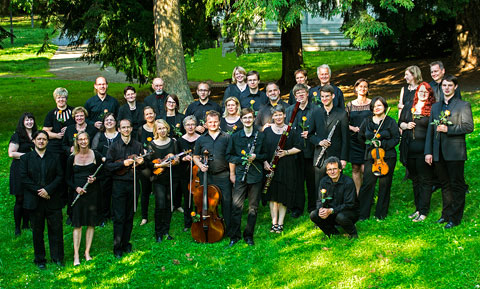 Stirring and modern, powerful yet full of emotion – This is how an excited audience describes the performance of the KlangArt ensemble under the direction of Rolf Brandes.
Jointly committed to the ambition of interpreting sophisticated works of both classic and modern composers, the members of KlangArt Goslar – eighteen vocalists and sixteen instrumentalists from all over Germany –
regularly meet for weekends of intense rehearsal. Motivated by a great joy and passion in making music together, they strive to present high-quality concerts of deep emotion. Dense and efficient rehearsals
and a strong dedication to music are their levers to successfully achieve their aim. The repertoire of KlangArt comrises both well-known and less well-known composers, such as Jenkins, Rutter, Whitacre,
Miskinis, Sisask or Nysted.
The ensemble’s artistic director Rolf Brandes discovered his passion for music early in life. He graduated from Hanover University of Drama, Music and Media and studied choral direction and conducting with Willi Traeder (Niedersaechsischer Singkreis) and Heinz Hennig (Knabenchor Hannover), Directors of two famous German choirs. During his many years as a music teacher in Goslar in Germany, encouraging young musicians and supporting them in developing their talents was a matter very close to his heart. Some of them pursued a professional career in music themselves and can nwo be found in the great national and international concert halls.  Since 2008, the choral and intrumental ensemble of
KlangArt Goslar is his dedication. 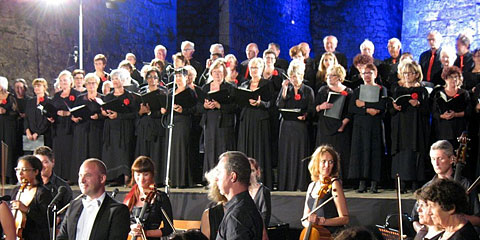 This choir gathers singers from all over the south-west region Aquitaine, led by the music director and choirmaster Damien Sorraing.
It is a recent vocal ensemble which regroups amateurs who are passionate about singing a variety of music works – from the 18th century with Mozart or Haydn to the present day with Martin Palmeri. The Misa Tango was performed in Aquitaine with a countertenor soloist. 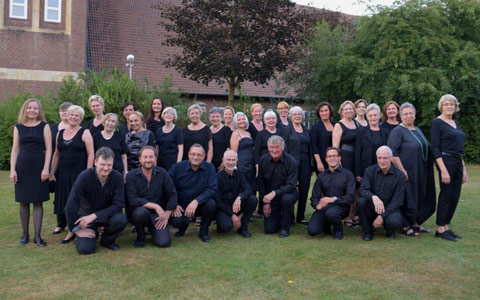 The “Sinfonische Chor der Musik Akademie” (Symphonic Choir of the Music Academy) has been launched as a project choir under the direction of Harald Meyersick in January 2005. The intention of the choir is the development and performance of large symphonic choral works with orchestra. Following this intention the choir publicly performed for the first time in 2006 with the “Requiem” by W. A. Mozart. The response was overwhelming and motivated H. Meyersick to start another project. The “Christmas Oratorio” by J. S. Bach came to stage in 2008. And again the reviews were full of praise so that the choir, now including up to 30 singers, took up an even bigger challenge: The “Great Mass in C minor” by W. A. Mozart! A highlight in the Vita of the choir was also the performance of “Carmina Burana” by Carl Orff at the 5th anniversary of the city “Greven an die Ems” with the Kaliningrad State Symphony Orchestra. With a performance of “The Armed Man” by Karl Jenkins the choir presented again its enormous potential to an enthusiastic audience. Still under the unforgettable impression of this concert H. Meyersick chose another poignant choral work and brought “Stabat Mater” of Welsh composer Karl Jenkins to the stage. Another milestone was the performance of Misa Tango by Martin Palmeri in spring 2015. A further highlight is the invitation to the world premiere of “Tango Credo” by Martin Palmeri in 2017 in New York.

Superar is a non-profit organisation offering free-of-charge instruction in vocal and instrumental music to children. Founded in 2009 by the Vienna Konzerthaus, the Vienna Boys Choir and Caritas Vienna, Superar works in locations where the energy of music positively influences the lives of children who otherwise would have little or no access to the arts. The program thrives because the rehearsals are frequent, exciting and fun.
In addition to the development of music skills, the program benefits every child with the acquisition of many other important competencies: concentration for long periods of time, dedication and persistance with the task at hand, and creative thinking. As instruction is held exclusively in groups, the children readily develop a sense of community, tolerance and an understanding for cultural differences. Repertoire choices are made to represent every group in the program. The music making thus brings along a process of integration, awakens a curiosity for lifelong learning and serves as a model of equal opportunity for all.
Superar programs enroll over 1300 children in Vienna, Salzburg, Graz and Vorarlberg, and 1000 children in Bosnia, Lichtenstein, Romania, Slovakia and Switzerland. As an example of diversity, there are 29 languages and 11 religions represented in Superar Vienna alone. Superar offers instruction within the school day, integrated in the daily schedule, or in afterschool programs. All ensembles are non-auditioned and offer a wide variety of performance opportunities. 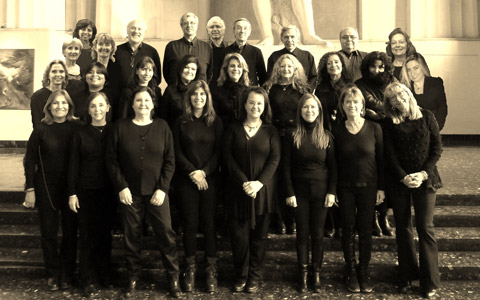 mber ensemble is integrated by choristers from different choirs that led the Director Martin Palmeri in Buenos Aires (Choirs  of Vicente Lopez, Faculty of Law, Esclavas School, Argentina Modelo School). These choirs have been dedicated to interpreting compositions from different periods and styles, both “a capella” as “symphonic and choral”, accompanied by qualified orchestras. All its members have played his “Mass to Buenos Aires” on several occasions since its premiere in 1996, not only in Buenos Aires (churches, theaters, Golden Hall of the Teatro Colón, National Radio), but also abroad (Utrecht -Netherlands-, Milano -Italy- and New York -USA-).