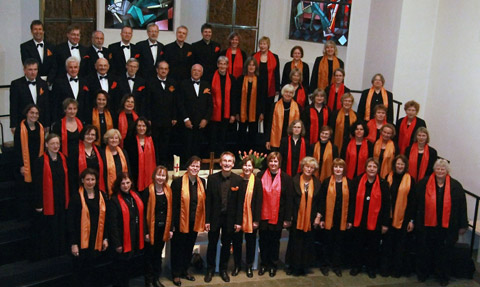 The Buxtehude Choir of Bad Oldesloe originated in the Peter-Paul Choir founded 1919 by the organist and choirmaster of the Peter-Paul-Kirche, Ferdinand Rahmsdorf. It was given its new name in 1951 on the occasion of the “Buxtehude days” held in honour of the well-known Barock composer, Dietrich Buxtehude, who is said to have been born in Bad Oldesloe in 1637. The current organist and choirmaster is Henning Münther.
For over 50 years now, the choir has specialised in the performance of challenging church music, in particular oratorios and masses, performed with soloists and orchestras. The choir, with currently more than 50 members, also contributes music for special services in the Peter-Paul church in Bad Oldesloe. The aim of the choir is to present a wide variety of great works of church music to its listeners.
During 2017 the Buxtehude Choir performed the Misatango by Martin Palmeri on three occasions: on 15th July in the Peter-Paul church in Bad Oldesloe and on 26th and 27th August during its choir trip to Finland, in Helsinki and in Kerava. 2017 will finish with Bach’s Christmas Oratorio (cantatas I and II and the Gloria BWV 191). In January 2018 rehearsals will begin for the oratorio Simon Petrus by Ludwig Meinardus. 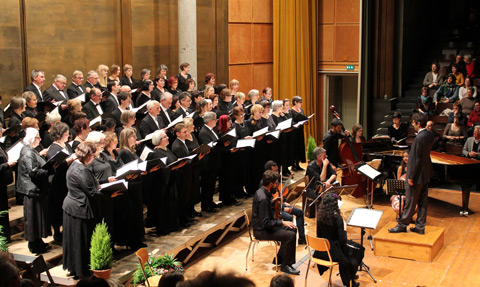 The Fribourg Symphonic Choir was founded in 1958 by Abbot Pierre Kaelin in order to give all amateur singers the opportunity to sing symphonic works. Since then, the works of the greatest names in symphonic music such as Mozart, Bach, Borodin, Ravel, Mahler, Verdi and Gerschwin have been performed under the direction sometimes of great names, Igor Markewitch, Charles Dutoit and Mathias Jens. Swiss professional orchestras regularly accompany us, but we were also fortunate to be accompanied by the Monte-Carlo orchestra, Nice Côte d'Azur orchestra, and the Israel National Orchestra, among others.
In 2017 we performed the Misatango by Martin Palmeri and the Stabat Mater by Karl Jenkins.
The training of amateur singers remains a priority for us, enabling us to bring to the greatest number this marvelous musical culture which can be a link of peace between the peoples. 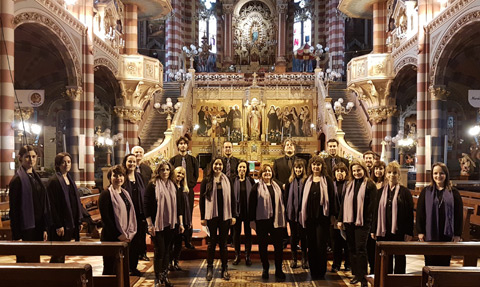 The choir was born as a study ensemble, formed by students of the singing career and other musicians of the “Instituto Tecnológico de Música Contemporánea” College. It was created in 2009 and directed by Mtro. Pablo Quinteros, and it has performed concerts in many halls and theaters of Buenos Aires City since then. Actually 25 singers participated in the “Argentinian Project”, a repertoire of argentinian composers (Piazzola, Moruja, Palmeri, etc).

In 2016 the ensemble participated in the 20th anniversary concert of  Martín Palmeri’s Misatango, held in Carnegie Hall (NY-USA); the choir also traveled to the United States in 2017 for the world premiere of Palmeri’s Tango Credo celebrated at Lincoln Center.

As choral director and arranger, he leads the Coro ITMC Buenos Aires, CORAL ALMAVIVA, Cheek to Chicks! and VOCAL A LA CARTA. 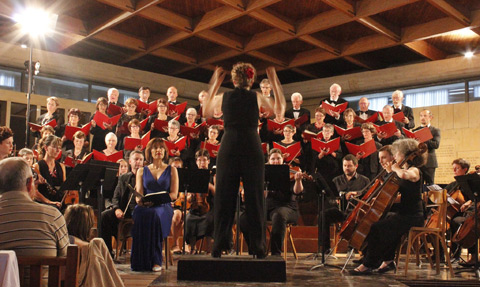 The choir « Le Tourdion », named after a Renaissance dance, was created in Dole, in the French jura, in 1978. It now counts about 40 chorus singers.
The activity of the choir has always been turned towards classical works. Thus « Le Tourdion » performed Hayden’s Stabat Mater, Fauré's Requiem, Stravinsky’s Wedding, Beethoven’s Ninth Symphony, Mozart’s Requiem, Saint John’s Passion, Brahms’ German Requiem, Mozart’s Coronation Mass ...
Since September 2012, Florence Grandclément has been directing Le Tourdion and has oriented the choice of works following 2 trilogies : the first being more classic and the second, contemporary. After having peformed Antonio Vivaldi’s Gloria RV 589, BWV 227 Jesu motet, Johann Sebastian Bach’s Meine Freude and Solemn Vespers for Wolfgang Amadeus Mozart’s Confessor KV 339, Le Tourdion now is playing works by contemporary composers.
The second trilogy began in June 2016 with Norwegian composer Ola Gjeilo’s Sunrise Mass. With this "rising sun" mass, the composer tends to convey a certain form of spirituality and a metaphysical vision of the human condition. It transcribes the fusion of celestial harmonies and dissonances of the earth in perpetual evolution and leads the listener in an imaginary journey from heaven to earth ...
As second part of our trilogy of contemporary works, Le Tourdion performed, in June 2017, Misa in Buenos Aires or Misatango by Argentine composer Martin Palmeri. A classical mass written on a tune of tango. The instrumentation based on a string orchestra, a piano and a bandoneon gives this work a very particular color. The syncopated rhythms, the well marked highlights, the alternation between the instrumental interventions and the voices underline the intensity of this work and transport the listeners in the marvelous universe of the tango.
Finally, the second trilogy of contemporary works performed by Le Tourdion will be closed by Jenkins’ Stabat Mater, which will be given in Dole on June 8, 2018.