was composed between September of 1995 and April of 1996. The premiere performance was given on August 17, 1996 at Teatro Broadway in Buenos Aires by the Orquesta Sinfonica nacional de Cuba, the Choir of the Faculty of Law of the University of Buenos Aires and the Polyphonic Town Choir of Vicente López (choirs to whom the work is dedicated). This premiere featured bandoneón player Julio Pane, pianist Hernan Posetti, and soprano soloist Mariela Juni under the direction of Fernando Alvarez.

Misatango was first recorded in June 1997 in Liepaja, Latvia by the Liepaja Symphony Chorus led by Fernando Alvarez with bandoneón player Pablo Mainetti, Martín Palmeri on piano, and mezzosoprano soloist Alejandra Malvino. In December of 2000, at the request of Maestro Mario Benzecry, a new symphonic arrangement was premiered by the Coros Facultad de Derecho of the Universidad de Buenos Aires. This concert was broadcasted throughout the country by Channel 7 via UBA TV.

From two important musical experiences in my personal musical history—arranging tango music and directing choirs—the idea emerged to write a work that somehow integrates these two experiences that developed independently. It was always my intention to arrange tango for choral groups, attempting to maintain the “essence” of the genre. The existing choral repertory lacked neither “a cappella” nor accompanied tango arrangements, but while previous arrangements were sometimes acceptable, they have not been satisfactory. Though the technical and expressive possibilities of choral voices is great, for some reason it is difficult to achieve the precision that the tango genre requires.

Taking this into account, my objective in this composition was to maintain the harmonic language, rhythms, melodic designs, and all of the characteristics of tango within the orchestral score, thus allowing the chorus to have full liberty to just “sing the mass.” My decision to use the Latin text could be explained by the place of the Latin language among centuries of choral music and the universal connection to the language. But I have to say that my decision also carries the weight of my aesthetic requirement: Latin gives the work a reserved, esoteric quality which, from my point of view, has much to do with tango—especially progressive tango. 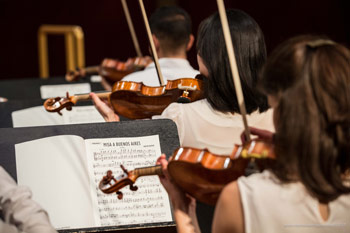 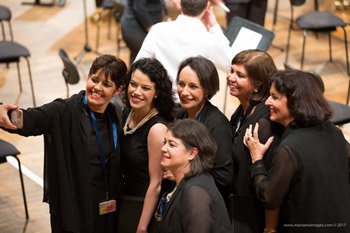 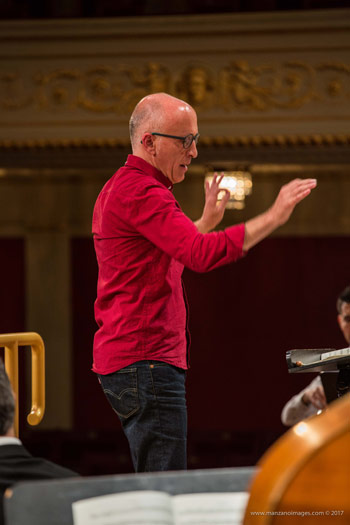